Orange (and Green, Blue and Purple) Troops & the Visibility of Government

The Pasukan Oranye is a citywide solid-waste force that was created under the Infrastructure and Public Facility Management Agency (PPSU) and charged with getting down and dirty to manage municipal sanitation. Dubbed the ”Orange Troops” (#PasukanOranye) for the contract workers’ orange uniforms, the crews’ responsibilities include clearing drains, collecting trash and fixing potholes. Hiring sanitation workers is important, but not exactly innovative. Jakarta’s innovation was in branding this effort and integrating it into a broader communications strategy, so that the ubiquitous orange-clad workers become associated with effective city government.

Democracy needs to deliver on its promise of more responsive, accountable government that helps ordinary citizens, particularly (but not only) in the wake of a democratic transition. However, the structural reforms that accompany a transition are often invisible to citizens, or worse -- public money is seen pouring into facilities, salaries, trainings and other privileges in order to stand up, support and inoculate the elite members of independent legislatures and courts. Citizens may feel they don’t have any stake in the government, and the resulting disillusionment and frustration can seriously undermine the consolidation (or sustainability) of democratic norms and values.

I am more than happy to pay my taxes for the Orange Troops.

How'd They Do It?

Prior to 2015, solid-waste management in Jakarta was decentralized -- small community and neighborhood units were responsible for collecting trash fees and then hiring individuals or work crews, primarily to clear sewers and rivers. The scope of work and residents’ ability to pay varied from neighborhood to neighborhood, and the system was insecure for workers, many of whom were making a third of the minimum wage or less. Former Jakarta Governor Basuki “Ahok” Tjahaja Purnama was reportedly frustrated by seeing piles of garbage, damaged roads and clogged drains around the city. His sanitation department organized an initial river-cleaning surge, and encouraged workers to post before-and-after pictures on social media to raise awareness about the problems caused by littering. Then in 2015, Jakarta passed a regulation that would centralize its waste-management system, collecting the trash fee directly from residents and bringing sanitation and maintenance workers onto the city payroll. Work crews were deployed evenly across the city, with 40 to 70 workers assigned to each of 267 districts. The city instituted a fixed minimum-wage salary, annual contracts and access to benefits such as transit and education support for workers’ children. And of course, the workers were given distinctive orange uniforms and orange boots. 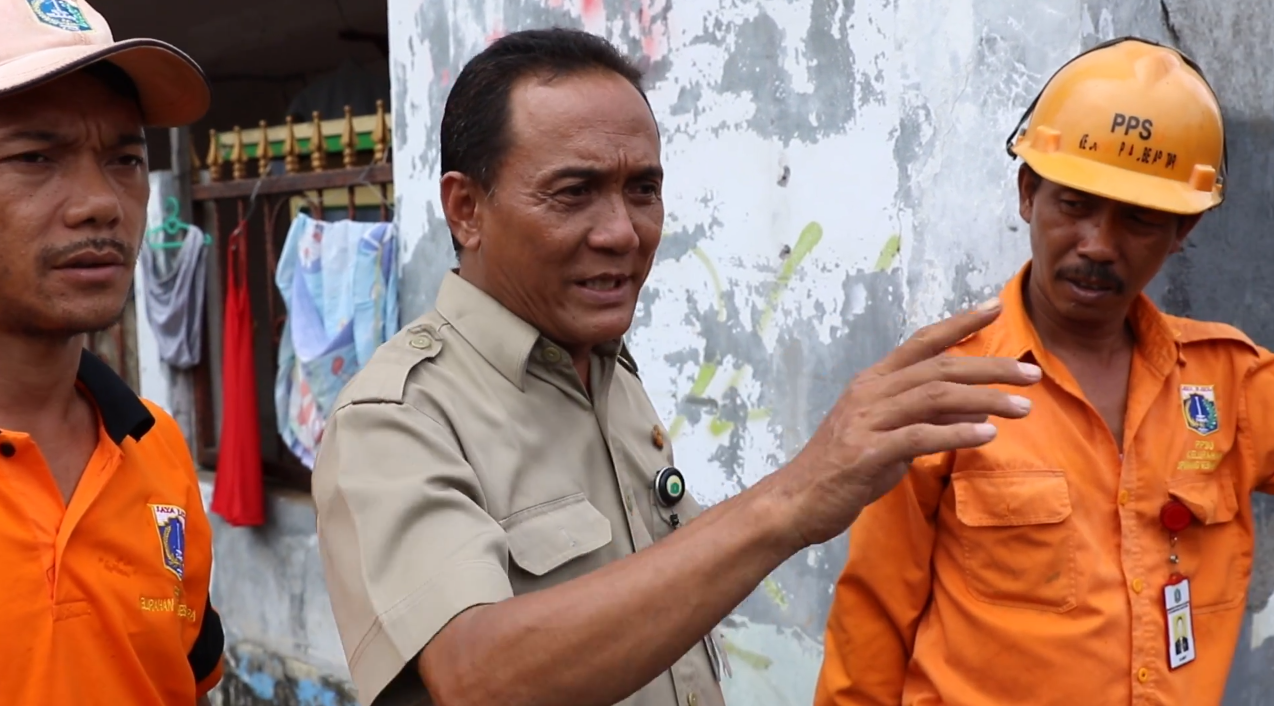 But it wasn’t just the orange clothing that brought visibility to the Pasukan Orange (Orange Troops) -- they occupy an unusually high-profile position in urban life because of the link between solid waste and flooding. In addition to daily waste management, urgent facility repairs and responding to citizen reports via the Qlue smartphone app, the Orange Troops are on call to serve as ‘emergency’ first responders when garbage is clogging drains and contributing to the city’s massive seasonal flooding problem. In the first year of their deployment, they were often credited with keeping Jakarta above water during heavy rains.

Gratitude for Solving a Real Problem

Citizens responded positively to the visible reduction in trash, downed tree branches, potholes and damage to facilities--and they credited the ubiquitous orange-suited work crews from the city. Shortly after the orange uniforms hit the streets, a blogger wrote, “Thank you Mr. Ahok, now your presence is felt in every corner of the capital city with an orange uniform.” In 2016, one social media commenter remarked, “I am more willing to pay my taxes to pay for the Orange Troops, compared to paying for DPR/DPRD members [the national and provincial legislatures, respectively]. Thanks Orange Troops :).” In early 2017, a clip of a PPSU worker diving into black water to unclog a drain went viral, with commenters marveling at the laborers’ dedication.

Difference for the Poor

Nine out of 10 respondents told a Kompas newspaper poll that the Orange Troops program was worthwhile. Satisfaction with the Orange Troops’ performance was highest among the city’s low-income residents, those making less than $375 USD per month. (The minimum wage is around $230 USD per month.) The newspaper speculated that these are the residents most likely to see a difference in their environment, and also noted that the program is providing steady jobs with a fixed income for relatively low-skilled workers.

The success of the initiative has inspired additional color-coded troops: Green Troops for maintenance of parks, open spaces and cemeteries; Blue Troops from the water-management agency to combat flood waters; and Purple Troops consisting of health-care workers and Alzheimer’s volunteers to assist vulnerable citizens with dementia.

Like any branded initiative, the Orange Troops are strongly associated with the administration (of former governor Ahok) that launched them. But the popularity of the initiative has given it many ‘fathers.’ It solves a real problem, and it created new constituencies: well-paid sanitation workers and residents of newly-clean or surprisingly-dry neighborhoods. When a city councilmember criticized the Orange Troops for getting lazy in mid-2017, his remark made the news.  To the extent that it becomes a regular fact of city government, it will face different sustainability issues—funding, of course, but also labor issues and turf wars with other departments.

The visibility of Orange Troops makes the actions of individual workers newsworthy, and so there is a constant stream of news stories about their pay, safety equipment, contract disputes, campaign violations, and other scandals -- a counterweight to the admiration and gratitude they inspire.

The Downtown Improvement District (DID) has a team of workers wearing yellow jackets who serve as cleaners, safety guides, landscapers, and community resource partners. Since its inception in 2005, the property values in the area have increased by 30% and the crime rate has decreased.

As a property owner and manager of over $30 million of assessed value in downtown Providence, I am pleased to tell you of my satisfaction with the accomplishments of the DID. There has been a tremendous improvement in the look of downtown and the feeling of pedestrian safety, thanks to the “yellow jackets.” I strongly support the DID’s renewal, mainly because I can’t imagine downtown without it! Joseph DiBattista, Hallmark Properties, Inc.