Jakarta has two citizen-reporting and service-monitoring platforms, Qlue and CRM, which channel citizen complaints to relevant departments and then track responsiveness. CRM is an acronym for Citizens Relation Management. It was introduced in 2017 as a replacement for an earlier version called CROP (Cepat Respon Opini Publik, or Rapid Response to Public Opinion.)  Where Jakarta has diverged from a typical script is in using Qlue and CROP as a performance-management mechanism for city staff. Response rates to citizen complaints are used to support KPIs and inform promotion and demotion decisions. And front-line community workers are expected to use the apps to report on their progress to superiors. It’s a high-tech, participatory version of a surprise ‘spot check’ practice instituted under a previous administration.

The performance of civil servants can be a decisive factor in bolstering or undermining public confidence in democratic governance. The Indonesian civil service, like its counterparts in many countries, has a reputation for being bloated and ineffective. As one reader of the Jakarta Post opined about the city’s Public Works agency, “They have been sleeping or just smoking cigarette in the office for a long time! Time to wake them up!” As in many civil service systems, there are strong bureaucratic incentives to avoid making waves and initiative is often insufficiently rewarded. To compound matters, civil servants have been historically underpaid, creating perverse incentives to demand bribes.

Civil service reform has long focused on minimizing subjective elements in hiring, promoting and firing decisions, to protect civil service positions from partisan pressures and political patronage. But robust protections for the professional civil service can also undermine accountability for poor performance. A fair and effective system that uses performance data can provide a way for more aggressive rewarding and punishing of civil servants, while potentially avoiding perceptions of subjectivity.

During his time as deputy governor, former Jakarta governor Basuki “Ahok” Tjahaja Purnama became known for burrowing into City Hall to push the bureaucracy on performance, and he retained this hands-on approach as governor. His personal aide Michael Victor Sianipar said in 2016, “Many governors in Indonesia don’t manage the bureaucracy. Our governor even looks at the fourth echelon,” referring to mid-level city employees.

The approach to performance management was multi-pronged. On a traditional front, Ahok instituted regular appraisals of government officials, and introduced quarterly performance-based bonuses for civil servants who delivered on improving services to the public, as well as demotions and allowance cuts as punishments for poor performance. In keeping with his bottom-up management approach, Ahok also solicited reviews from lower ranking officials of their superiors.

In an attempt to modernize and institutionalize oversight of workers, the city embraced technology and sought to promote managers who demonstrate a commitment to transparency and data-driven policymaking. The approach supposes tight links between open government, accountability and better performance. For instance, the city’s performance-data system (which straddles a number of pilot tools including the city-owned CRM, the commercial app Qlue and the Jakarta Smart City open-data project) can be used to collect complaints from citizens, intake progress reports from city workers, and track unit performance. There was a strong push to require city workers to use smartphones, including a requirement that subdistrict caretakers at the community and neighborhood level—the city’s part-time, front line staff who interface directly with citizens on administrative matters—must file three reports per day via the CRM/Qlue system. (That requirement was relaxed in early 2017 amid pressure.) Some of this data fed into key performance indicators (KPI) used to assess each administrative unit at City Hall. The citizen-reporting side of the system is designed to enable ‘e-blusukan’ (‘e-spot checks’), building on previous governor Joko Widodo’s practice of making surprise visits to city offices. In theory, anyone with a smartphone can conduct a ‘spot check’ by uploading a geo-located image. These inputs combine with traffic cameras and other data to trigger responses and inform departmental performance evaluations.

And there’s no doubt that jobs are on the line. “This has become the trigger for civil service officers in Jakarta to increase their performance, said Mr. Andriansyah of the city’s planning department. “You have to work better. If you are not performing, you will be fired. But if you are performing, there will be rewards.” Less than a year into his tenure, Ahok said he had demoted 2,500 civil servants, in a workforce of more than 70,000. During the summer of 2016, with his (ultimately unsuccessful) campaign for re-election in full swing, he promised to reduce the civil service again by half. 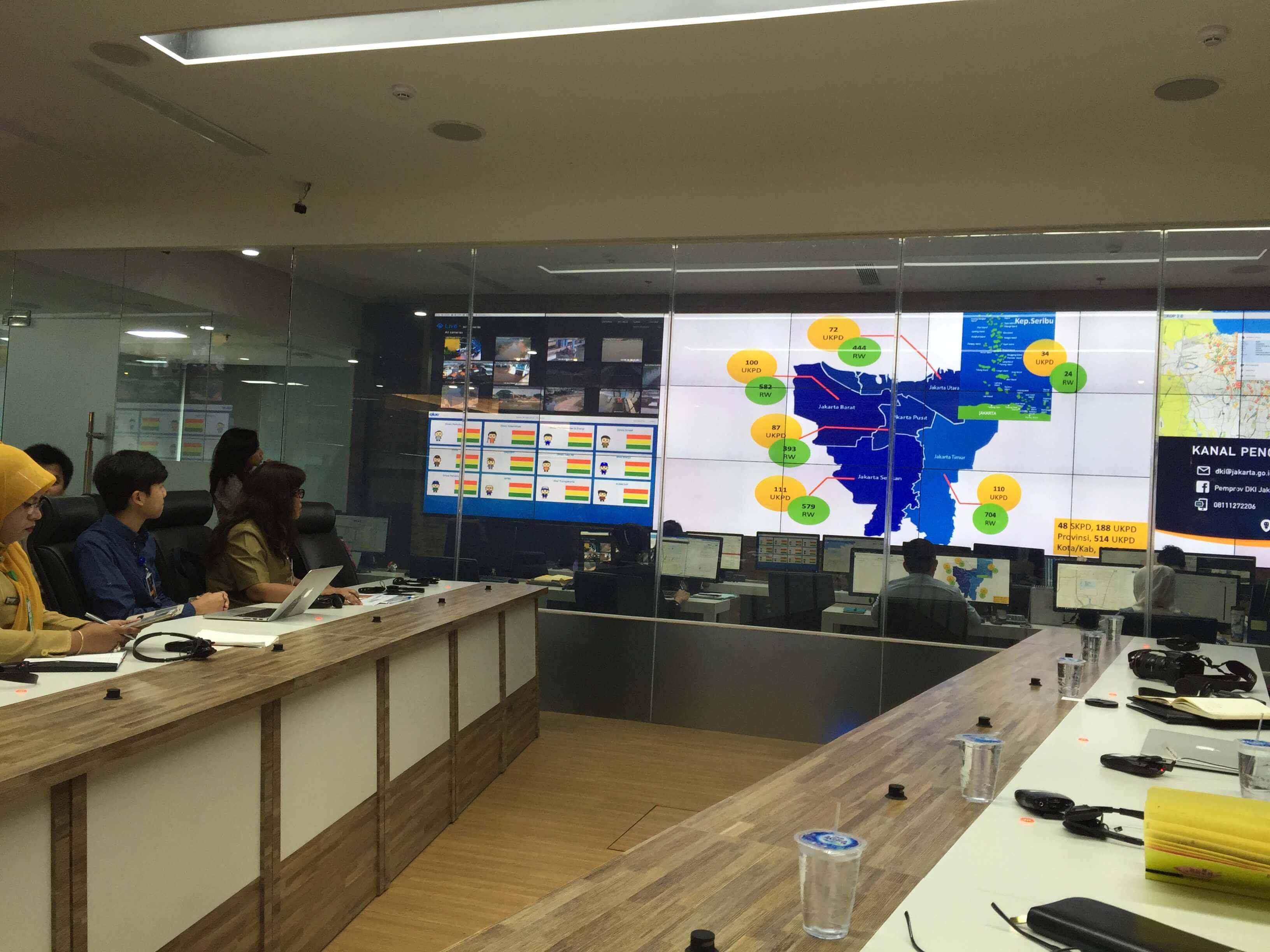 The strong incentive for city workers to monitor and respond to registered citizen complaints appeared to help build an active user base on both sides. According to the company behind Qlue (as told in news reports,) the platform was receiving some 40,000 reports per day more than a year after its launch, and some 90 percent of the city’s subdistrict heads had become active users of the app. And a pattern of response fueled additional citizen expectations and demands, in a virtuous cycle. In late 2016, Qlue users reported a dip in response rates, which was attributed to the governor’s absence from City Hall. (As required by law, the governor had suspended his official duties to campaign for re-election.) The issue got media attention and within a few weeks, users were reporting that response rates had bounced back.

Despite the relatively modest penetration of Qlue and Jakarta Smart City, civil society interviewees suggested that these initiatives created a powerful perception that it is easier for citizens to communicate with and receive information from the government. There also appeared to be a perception, particularly among young people, that the government was becoming cleaner, more representative and more effective. One citizen, after visiting a one-stop shop to renew her identity card, told the Jakarta Post, “I used to view public services in the Jakarta administration negatively. I thought that there would be many middlemen and that the officers would ask for illegal fees. To my surprise, the office provided good and quick services and the officers were friendly.” Former aide to Ahok, Michael Victor Sianipar, said he saw growing trust and hope that things were changing. “It will not only affect the city, but the entire country,” Sianipar said. “An earthquake. It’s not just a policy question. It’s a moral question. Do we want to have a clean government or not? Do we want to have a government of the people or by the elites? These are questions that we have never asked before.”

A chief complaint among city officials was that they were being held responsible for problems that have been mis-assigned to their districts.

Sao Paolo Aberta (Open Sao Paolo) is an unusual experiment in crowdsourcing that aims to provide citizen-led training the city’s 150,000 civil servants. Any of Sao Paolo’s 11 million residents is eligible to apply to become an "open government agent" and provide training to civil servants in any of four subject areas: open and collaborative technology; transparency and open data; networked communication; and mapping and collaborative management. To encourage public employees' participation, city workers who attend the courses gain credits in the municipal evaluation system that allow them to get pay raises.

A Citizen Feedback Monitoring Program (CFMP) was created to build trust between the provincial administration and citizens, by solving some of the most common issues that people face in their everyday lives. After visiting regional government offices, the provincial government proactively reaches out to citizens using SMS and voice calls, and feedback is instantly fed back to government officials who consolidate and address concerns. Concerned citizens can identify possible fraud and corruption. CFMP collects feedback anonymous and automatically.